Oh, Puppet, where have you gone?

Back in Savannah in the late 80’s, before Blockbuster came along and ran out all the independents, I used to rent movies at a store called “Captain Video”. Run by a gay couple, and guarded by their two Great Danes, Scarlett and Rhett, Captain Video was the greatest video store ever. It was at Captain Video that I first discovered such treasures as “Crazy Fat Ethel 2” (“Nothing comes between Ethel and a well-stocked refrigerator!” the box proclaimed), and “2000 Maniacs”, the terrifying tale of a small civil war-era town that comes to life one day every hundred years a la “Brigadoon” so its ghostly residents can exact revenge on yankees by eating them. These films, and dozens of others like them, were low-tech, no-budget masterpieces of ineptitude and gore, and I imagined the filmmakers had even more fun making them than I had watching them.

There was one film in particular that I found at Captain Video that haunts me still. None of the others could come close to it in terms of sheer awfulness. That film is “Black Devil Doll from Hell.”

Made in 1984 by director Chester Novell Turner, “Black Devil Doll from Hell” tells the story of Helen Black, a good, churchgoing woman who wanders into a “curio” store one day, and makes a very odd purchase: a ventriloquist dummy with cornrows. The shopkeeper intrigues Helen by telling her that the doll has the power to grant its owner their heart’s desire, but that she had sold the same doll on 3 previous occasions, and it always came back to her. Undeterred by the shopkeeper’s ramblings, Helen rushes home with her new treasure. 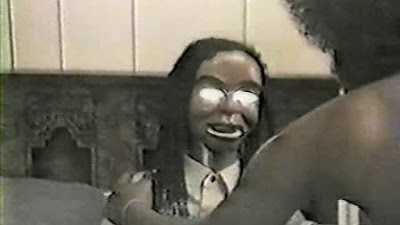 We know the doll is evil by the scary Casiotone synth music that screeches over much of the dialog every time the camera pans to it. Of course it isn’t long before the doll comes to life in Helen’s apartment, overpowers her and ties her to the bed, naked. The doll taunts Helen by telling her it is going to give her her heart’s desire, which, apparently, is to get nailed by a ventriloquist’s dummy. Helen protests meekly at first, but she soon gives in to the awesome pleasure she experiences as the devil doll enthusiastically performs oral sex upon her. After a few minutes of munching and trash talk, the devil doll is ready to get busy, and proceeds to pound the living daylights out of poor Helen. Overcome by lust, she eventually loses consciousness. When she awakens, she’s no longer tied up, but her tiny wooden lover is gone.

Forever changed by her encounter with the dummy, Helen hooks up with lots of non-wooden men in a vain effort to satisfy the intense sexual cravings the doll awakened in her. Helen finds out that puppet love is the best love, as none of the human men can scratch her itch. Out of desperation  she returns to the shop where she first purchased her supernatural "friend with benefits" and, wouldn’t you know it- the doll is there again!

I won’t spoil BDDFH for you by giving away the ending. You’ll have to see it for yourself, and you should. I will say that this film defies classification (and possibly explanation). It is in its own genre: softcore-blaxploitation-underground-horror.

Black Devil Doll from Hell was shot entirely on a handheld camcorder- a 1984 camcorder at that, and the synth music overpowers much of the dialog, especially when there’s scary stuff happening. The good news is, the dialog we can’t hear probably isn’t any better than the dialog we can hear, so it’s no great loss. The special effects are pretty basic. Since Black Devil Doll from Hell is actually a ventriloquist dummy, and since this was many years before computer graphics were cheap and plentiful, director Turner cleverly substitutes an actual little boy, dressed up like the devil doll, in those scenes where doll motion includes walking, jumping, and rooting around under the sheets. Turner appears to be inspired by other evil doll classics like “Trilogy of Terror” and at least 2 episodes of the original “Twilight Zone”.

I have an old worn-out copy of BDDFH on videocassette, and I am currently transferring it to digital video. I had almost forgotten how incredibly entertaining this film is, and I would hate to lose what is probably one of the few surviving copies of this underground classic. They just don’t make ‘em like that any more.
Posted by Unknown at 8:55 PM