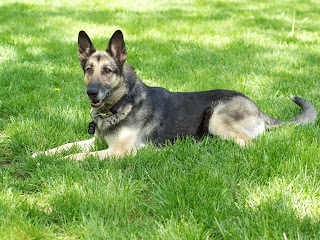 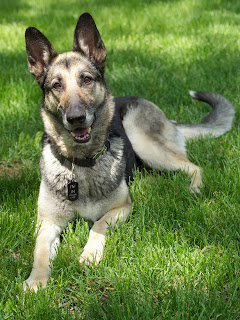 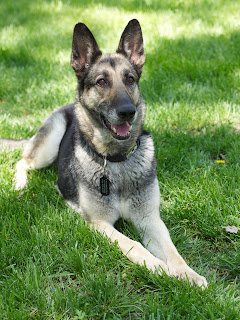 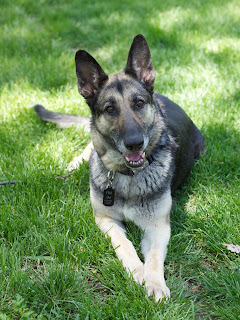 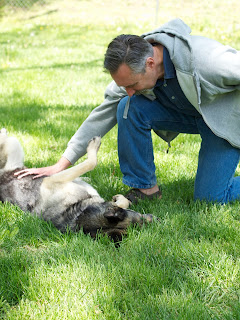 Now that she's all clean and pretty from her spa day yesterday, I wanted to get a few nice pictures of Farrah for the M.A.R.S. rescue website, to help show off what a beauty she is. We got out in the back yard with treats, squeaky toys and a stick, to try and get some alert, still photos. While we were taking Farrah's picture,  Dan, our next door neighbor, came out and asked about her. We explained that she's in foster care, and destined for a shelter in Minnesota.

While we were talking with Dan over the fence, I mentioned that Farrah has not been able to get along with our two dogs, Misty and Lucy. Turns out Dan is something of a dog whisperer, because before I knew it, he was in our yard, coaching Farrah and Misty! We kept them out there together for a good 10 or 15 minutes, and it was a friendly, laid-back encounter for them, and it ended on a positive note. So I'm delighted to see that the dogs can work out their differences. I think part of the problem that caused them to get so aggressive with each other was my own nervousness about introducing them. This time, Dan and I just kind of hung out and chatted, and let the dogs sit around and chill out near each other. There was a teensy bit of growling, but that's it. Otherwise, they were great!

Emboldened by our success, I even let Farrah check out Mr. Kitty. She sniffed his butt (which he hates) and then she lost interest. So she doesn't seem too worried about cats at all. Now, granted, that's just one crusty old Siamese, but it's certainly encouraging.