For awhile now, I've wanted to try being a foster home for an adoptable dog. Thursday, I saw a post on Facebook from The Pet Connection, (the shelter where we got Lucy) seeking a foster home for a German Shepherd that was in KCK animal control, on the "kill list." They were looking for short-term foster care until the dog could be transferred to a rescue organization in Minnesota. I checked with Jim, and he was up for it, so we signed up to be Farrah's foster parents! 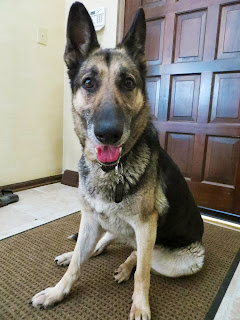 We picked up Farrah at Unleashed Pet Rescue, in Mission, from Lori, a volunteer from Doghousing, Inc, a foster care organization. It's hard to believe somebody would've let this girl go, but that seems to be the case. She was picked up as a stray. After one day, here's what we know about her: 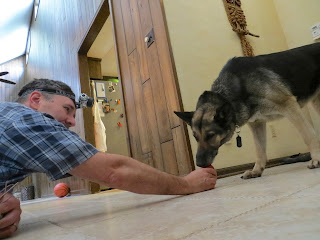 She isn't sure what to do with a peanut butter-filled Kong toy, although she does find it intriguing 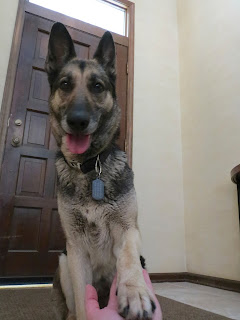 She knows some commands, including "sit" and "shake." In fact, she wants to shake all the time! 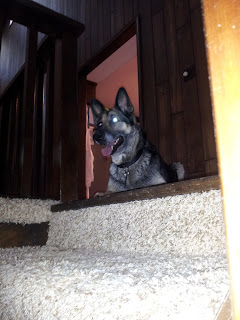 I get the impression she's never lived indoors. She seems kind of freaked out by our house, especially the stairs.

She hates Lucy, and she's not crazy about Misty, either. She's good on a leash, though, and we took the whole pack for a walk this morning. Hopefully if we keep doing that she'll chill out and stop snarling at the other dogs. We don't trust her around the cat, and probably won't let them come in close contact with each other. If she was living on the streets, she might've learned to hunt small furry things, and she could probably finish off Mr. Kitty in one bite. Not that he'd have much meat on him.

Oh, much like Misty, she's fairly camera-shy. I'm going to try and get some better, sharper photos of her, but this was the best I could do today.
Posted by Unknown at 4:26 PM